With The International Grand Final Preview appearing on ESPN 2, watching it was tragic. There was great hope that this preview show could help bring popularity into eSports and DOTA 2, but with the dull panel discussions and content that required knowledge of the game, it ultimately failed at that chance. Also, the choice of attire for one of the panel members was questionable. If you want eSports to be taken seriously, at least dress for the occasion. The producers of this segment shouldn't have really made it a Grand Final Preview, but an educational segment about the game, the tournament, and eSports in general. The main audience of ESPN is people who are looking forward to sports highlights and news, but when something new comes up, it's hard to follow without previous knowledge. As someone who doesn't follow the DOTA 2 scene, I didn't understand most of the show. It was catered more toward people who followed the tournament and the game.

HBO also had the chance to showcase eSports when they interviewed an employee of Riot Games and a League of Legends pro player for their show Real Sports. A problem arised when their uninformed hosts began criticizing video games, which resulted in their audience of people, who also lack knowledge of eSports, judging that video gaming is not a sport. The Real Sports host would throw in some insulting, stereotypical phrases in her report by calling pro gamers “nerds” and chastising them for “being in front of their computer screens all day in their fantasy world”. Mainstream media has always been covering the more popular sports, but when video gaming tries to appear alongside them, uninformed criticism appears. 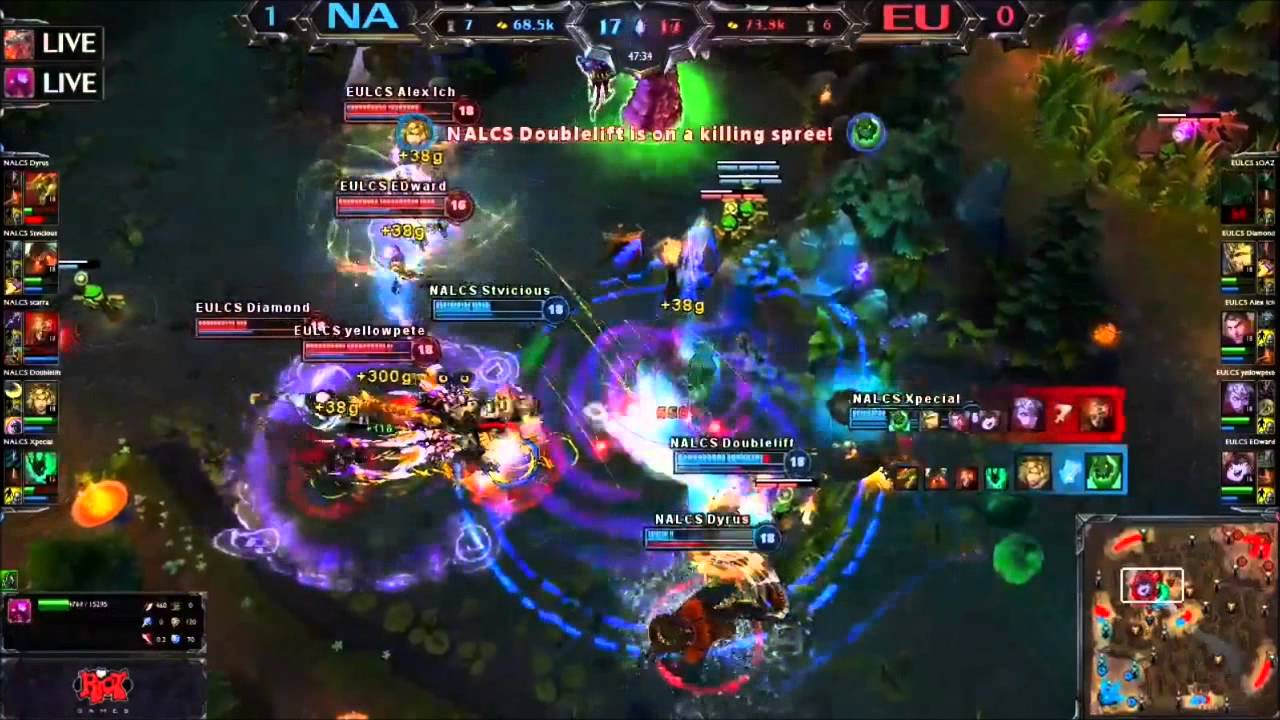 With this picture above, I can tell what's happening and the skills of all of those champions because of my vast experience with League of Legends, but when it comes to DOTA 2, I can't follow it well because I don't know what each champion can do. For most people, following other professional sports is easier because of the simpler rules, but with MOBAs that have over 100 champions with different skills, it's becomes difficult. Having something similar to The International Noob Stream would benefit eSports greatly if more tournaments would ever be shown on TV.

ESPN failed to introduce its audience to a basic understanding of what eSports and DOTA 2 is and HBO ended up criticizing eSports in their report on League of Legends. What's needed is the basic understand of how eSports works and basic knowledge of each game. Without it, people will continue to stereotype gamers and criticize eSports for not being a true sport. People don't know of the hard work and strenuous practice regimes that the pros undertake to become the best.  I've written an article defending professional gaming as a sport, but gamers ended up commenting things such as "Gaming is only for recreation purposes." and "Sitting in a chair and pressing buttons isn't physically demanding". In a Forbes interview of the Blizzard Games Director, Dustin Browder, he spoke about professional gamers:

"These guys are athletes. There’s physical and mental conditioning to it. These guys are, in many cases, playing 12 hours a day to prepare for these matches, or even just constantly. These guys are training as hard as a regular athlete would to train for these things. They have to have the dedication and enthusiasm for it, and there’s a lot of coaching that goes on as well. A lot of these guys have coaches and are parts of teams. They create a culture of support around them so they can learn to master the game. What good are you if you can’t practice against somebody who’s great? So these guys create teams of people where they’re all really good, they practice against each other constantly, and they compete against other teams. This allows them to create this sport atmosphere where they work as hard as any regular athlete, and try as hard. They have to have the psychology and mental endurance. You see these guys when they lose a match; they are crushed, just like an Olympic hopeful would be crushed if he didn’t make it. They’ve got to have the endurance to overcome that and say, ‘Yeah, I lost the biggest match of my career, but I’m not done. I’m going to come back and overcome this,’ and sometimes they do. It’s just absolutely amazing the trials, tribulations, and challenges these guys face every day."

Acceptance and knowledge. That's all that's needed from people in order for eSports to grow in the likes of the NBA, NFL, etc.

Did you catch our latest interview? - Chatting With ChuDat: A Summer of Smash and His Experiences