Three weeks ago, I attended Super Smash Sundays at Super Arcade hosted by Team OXY and Level | Up. It was finally my chance to compete with high-skilled players rather than some randoms at a teahouse tournament.

So I arrived at Super Arcade, paid my dues, and finally got to playing some friendlies. I was watching some Captain Falcon players, then I thought to myself, "It's only Captain Falcon. His recovery sucks, so I should have an easy time edge-guarding as Marth." Alas, it wasn't the case. In my first friendly, I ended up playing a Roy (who I discovered wasn't actually my opponent's main). I predicted it was one of those players who both uses a low-tier character and isn't too skilled at Melee. I ended up losing because I was so nervous (and rumble wasn't on, but No Johns here). My opponent read me so well and I also took 2 stocks off of him, so I thought I would be able to beat him in a rematch...until he played his main, Mario. Needless to say, I was 4 stocked. After those matches, I got to play the Captain Falcon guy. And again, my prediction was wrong. My opponent was moon-walking all over the place and hit me with 2 knee combos, both of which I had never seen in any match I've played before. That was the point where I realized that I was probably one of the lower skilled players there. That did not discourage me though, for I knew these beatings would help me get better.

After the Captain Falcon match, I left the station and started to watch other friendlies until I saw Ken. Ken was my inspiration to main Marth after watching the Smash documentary and I also learned how to play Marth after watching his tutorial. I was able to get in after waiting for the rotation and our match on Pokemon Stadium was amazing. During the match, I DI'd inward at his aerials so I could get Ken comboed by Ken himself. I was finally comboed, but survived because I was at a low percentage. Finally at the end of our match, he finished me off with a sick chain of aerials and side b's off the stage. I was able to take out 2 of his stocks during our match, so it felt awesome being able to do that against the King of Smash. He was also the first pro player I've ever played in any video game, so that was pretty sweet too. What I enjoy about the fighting game community is that anyone is able to face the pros either in friendlies or in pools, rather than the exclusivity of other games such as League of Legends and StarCraft II. The fighting game community is more open to its fans and players. The salt and drama in the FGC is pretty entertaining too. (Leffen and Chillindude anyone?) 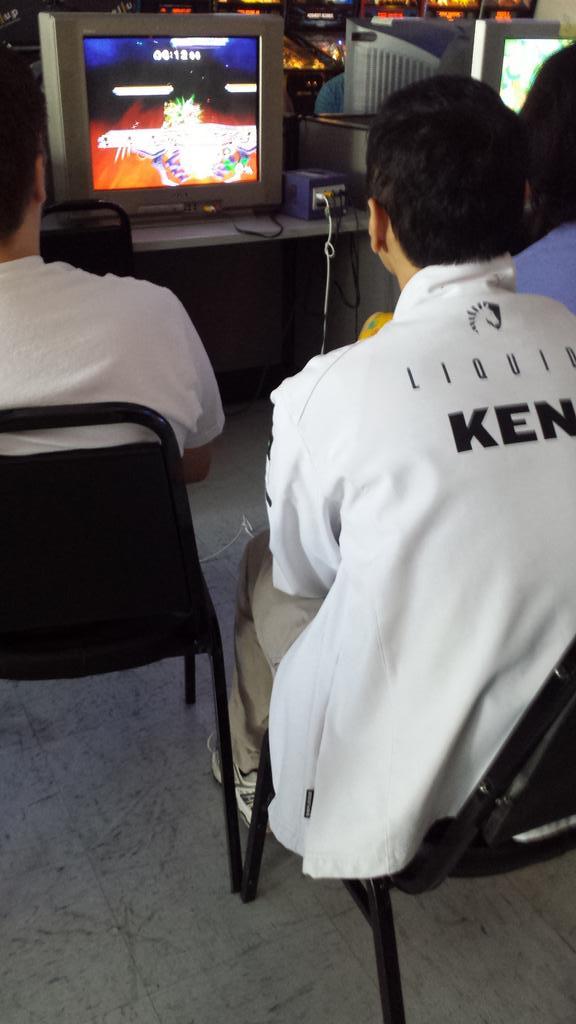 Moments before I got wrecked...

Finally, doubles started. I didn't really care much for doubles because I prefer singles, due to the fact that teams is dependent on your teammate, which is a reason why I decided to quit League of Legends. So, my partner and I first face a pair of Sheiks, which I hate so much as Marth. We ended up losing our first match, so I decided to switch to Jigglypuff because I knew she was pretty good at teams and I knew how to play her decently. I ended up doing better in our second match, but we ended up losing the set. Next we faced a team with the Captain Falcon guy I faced earlier in the day, and yeah...we lost 0-2 and were out of doubles.

Doubles was still going on with the Top 8 playing on stream, but finally, what I've been waiting for, singles began. There were 4 pools of about 25 people each, with pro players getting first round byes. I was in pool C (check me out on Challonge!) I had to wait over an hour for pools A and B to finish, so when I finally got called, my first match was a mirror match against a guy from Las Vegas. I won stage selection, so I ended up choosing Final Destination, my favorite stage and where mirror matches are meant to be held. From the start, my opponent had incredible movement compared to mine, so I had to be very wary with my dash dancing and wait out his mistakes so I could grab. My plan worked with my successful runs using f-throw into f-smash tippers and crouch canceled dashes into f-smashes, but I lost my first match. I took him to Pokemon Stadium, where I won, but in the end, in our final match on Dreamland, on the final stock, I lost. I asked my opponent after the match how long he's been playing for and he told me 2 years, which surprised me, since our match was so close and I've only been playing since this June.

An old picture of Super Arcade, but you can see how much they care about the FGC

Next, I played my loser's bracket match and I played against a Sheik main, which I loathe as Marth. The only other character I knew how to play decently was Jigglypuff and she was also a counter to Sheik, so I decided to play Jiggs. It didn't work out well though, as I was 4 stocked. Then, I went back to Marth to see if I could do anything against him. I brought him to the last stock, but ultimately lost the set, ending the tournament for me. I think I would have had a decent chance of winning the set if I had picked Marth from the start, but I was okay with losing.

After, it was just waiting for my friends to lose, so we could go home. While waiting, I played some random guy in Marvel vs Capcom 2, which greatly re-sparked my interest in traditional fighting games. (I dropped $160 on a new fight stick so I could become the next Rico Suave) Nevertheless, learning how low my skill was from SSS greatly inspired me to constantly return, so I could get better.

Practicing on your own or with friends is great, but the best learning experiences comes from attending tournaments. Always remember that there is always going to be someone better than you at anything, so don't be discouraged if you lose a lot; you can only rise in skill.

Shout out to Team OXY and Level | Up for hosting this great tournament series, which enables SoCal Melee players to have constant practice with players and pros near and far! Hosting this series, similar to Riot Games's LCS, is a great way to keep players active in the community!